Sanel Redžić - a classical guitarist, sound engineer and the teacher are one of the most virtuosic and enthusiastic musicians of his generation. Known for his varied repertoire and lively performances, he is quickly becoming one of the most important figures on the international scene. Born on July, 25th 1988 in Tuzla, Bosnia and Herzegovina. Mr Redžić started to play the guitar at age of eight under the tutelage of Predrag Stanković with whom he later finished secondary music school in 2007 with the highest marks. He then continued his Diploma, Master and Konzertexamen studies at the Hochschule für Musik “Franz Liszt” in Weimar under Thomas Müller-Pering and Ricardo Gallen. Mr Redžić has achieved a lot of success in competitions; winning top prizes in Tokyo, Tychy, the “Forum Gitarre Wien”, Changsha, Markneukirchen, "Parkening" guitar competition in Malibu, “Anna Amalia” Weimar, “Andres Segovia” Velbert, Kutna Hora, “Guitar Mania” in Lisbon, Iserlohn, "Fernando Sor" in Rome, "Emilio Pujol" in Sassari and the “Guitar Art Festival” in Belgrade. He is also frequently invited as a jury member at competitions and gives regular masterclasses. A sought-after concert artist, Mr Redžić has performed around the globe to date as a soloist, together with other musicians like violinists, cellists, accordionists, singers, harp players or other guitarists. His concert tours brought him to the countries such as Bosnia and Herzegovina, Serbia, Croatia, Hungary, Slovenia, Bulgaria, Poland, the Czech Republic, Austria, Germany, Switzerland, the Netherlands, Belgium, Spain, Portugal, France, Italy, Greece, Cyprus, Russia, Mexico, Chile, India, China, Japan and the USA. A number of these concerts took place in famous concert halls such as the Concertgebouw Amsterdam, Tokyo Bunka Kaikan Recital Hall, Yamaha Concert Hall und Hakuju Concert Hall Tokyo, Carl-Orff-Saal in Gasteig in München, International House of Music Moscow, Smetana Hall in Prague, National Philharmonic of Ukraine, Kolarac Hall Belgrade, Philharmonic Hall Paul Constantinescu Ploiesti and many others. He is also a frequent soloist with various orchestras worldwide and has received high praise for his performances from both critics and audiences alike. Composers like Dušan Bogdanović, Konstantin Vassiliev, Vojislav Ivanović and Jan Depreter dedicated music to Mr Redžić. Since 2015 is Mr Redžić active as a sound engineer as well. He is frequently recording CDs and videos for himself and other musicians. His transcriptions of baroque music, especially of music by Johann Sebastian Bach are becoming very popular among classical guitarists. Mr Redžić has recorded several CDs that were published for Gramofon Sarajevo, Central German Radio (MDR), Multimedia Music and KSG Exaudio. Additionally, he has appeared in numerous radio and television productions. For years Mr Redžić is also a successful teacher and he is currently teaching at the Hochschule für Musik "Franz Liszt" in Weimar, at the University in Erfurt and at the University in Osijek and since 2016 he is organizing his own Summer guitar academy "PrSt" in Bosnia and Herzegovina. 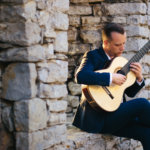