Dance, academics, and home – these are the spheres Mythili inhabits. An ICCR Empanelled artist, undergoing advanced training under Guru Kalamandalam Kshemavathy and Guru Sadanam Balakrishnan, Mythili has also learnt briefly at Nalanda (Mumbai) and Shruthilaya and has had a long association with Dasyam, founded by Smt Gopika Varma as a student, instructor and performer. Her learning also took her to Natanakairali, where she underwent three phases of the Navarasasadhana workshop under Guru G Venu and learns the Desi Mohiniyattam repertoire from Guru Nirmala Panikker. Mythili received her doctorate from the Humanities and Social Sciences department of IIT Bombay under the guidance of the scholar and Hindustani music exponent Prof. Milind Malshe in ‘Semiotics of Mohiniyattam’. Mythili loves to experiment and is always full of ideas to dance to new texts and concepts without the limitations of language or religion. She has composed her own repertoire which includes Telugu compositions, selections from Kalidasa, and Sufi compositions in addition to the traditional pieces. ‘Moham’ is an institute in Hyderabad initiated by Mythili four years ago to promote the dance form of Mohiniyattam. She was felicitated by the Telangana Sangeet Natak Academy, last year for her efforts in teaching and performing the dance. Her book publications include Mohiniyattam, an Indian dance Tradition: A Language of Feminine Desire published by Shubhi publications, and an edited volume Scripting Dance in Contemporary India by Lexington Books. She has received some recognitions such as the Padmavathy Puraskar, and Yuva Kalaratna and Amrapali Award. Some highlights of her performances are her solos at India International Centre (Delhi), Nalanda Nrityotsav (Mumbai), SICA and Kalasaagaram (Hyderabad), the CORD annual conference in New Mexico and participation in the group productions of Dasyam, and in Sri Sadanam Balakrishnan’s production, ‘Radha-Madhavam.’ Mythili teaches courses relating to culture, arts and communication at the National Institutes of Design, in Ahmedabad, Kurukshetra and Bhopal. She also held the Tagore scholarship for cultural research from the Ministry of Culture, Government of India where she worked on the buried histories of the courtesans in Deccan during the Nizams’ period. 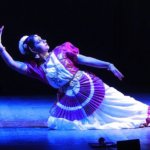