To those of you in guitar and metal circles, Joe Stump should need no introduction. The Shredlord has been raining down full throttle neo-classical/shred/speed metal since his debut Guitar Dominance was released over 27 years ago. He was named by Guitar One magazine as one of the top 10 fastest shredders of all time, by Guitar World as one of the 50 fastest players of all time, and by Guitarist magazine as one of the top 20 shredders of all time. He has appeared in countless guitar and metal-based publications, fanzines, and webzines worldwide. The American shred guitar legend has toured the world both as a solo artist and with metal bands Joe Stump’s Tower Of Babel, Joe Stump’s Reign Of Terror and Holyhell . Joe is also the guitarist in the legendary hard rock band Alcatrazz. The band relaunched and released its first record since 1986, the album Born Innocent went to 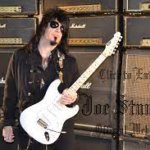