Yamaha Artist Jarred Dunn has performed internationally as a recitalist, chamber musician, and soloist with orchestras, including performances in Europe, North America, and Australia. Critics have described him as “a piano sound-colour magician” (Muzikos Barai, Vilnius), “evocative and mystical” (New York Classical Music Guide), “technically perfect” (Belarusian First Radio), and “a virtuoso with the most exquisite touch” (Freethought Today, Madison). He has been featured on the CBC, WQXR New York, Belarus First Radio in Minsk, and Freethought Radio-Television. Mr. Dunn won First Prize and Concerto Award at the 2018 Lithuanian International Chopin Competition and was a finalist/prizewinner in the 1st Jan Hofmann International Piano Competition in Kraków. He was featured on the CBC’s Top 30 Under 30: Hot Canadian Classical Musicians and This is My Music. He enjoys playing concertos with orchestras in Canada and abroad, most recently with Niagara, York, McGill, Etobicoke, Toronto Sinfonia, Vilnius Chamber, Toruń, NOSPR Katowice, Eurasian Chamber (Berlin), Budapest Chamber, and Belarus Radio-Television Symphonies. Mr. Dunn is described by Tonebase Piano as “a revered pedagogue.” He has given lectures and master classes at the Chopin University of Music, University of Silesia in Katowice, University of Puget Sound, MTNA Seattle, Queen’s University, Earl Haig Claude Watson Arts School, and RMT Associations across Canada (BC, Alberta, Yukon, Ontario). He has won many awards for his scholarly, pianistic, and pedagogical achievements. His research projects are funded by the FRQSC and by McGill University Schulich School of Music, where he teaches piano. His articles are published by the CMEA and Canadian Music Teacher journals. Of special importance to him was research at the former site of Auschwitz-Birkenau and music during the Holocaust, culminating in an article about Anita Lasker-Wallfisch (former cellist of the Auschwitz Women’s Orchestra). A double-graduate of the University of Toronto, he pursued professional studies at The Juilliard School with Jacob Lateiner and Yoheved Kaplinsky (with whom he studied in Aspen). While in New York, he continued his studies with Dorothy Taubman. He graduated with Distinction from the Karol Szymanowski Academy of Music (MM, Post-Grad Dip) where he studied with Anna Górecka (daughter of composer H.M. Górecki). He completed an Artist Diploma at the Feliks Nowowiejski Academy of Music in Bydgoszcz where he was a pupil of Katarzyna Popowa-Zydroń. He also worked extensively with Maria João-Pires. 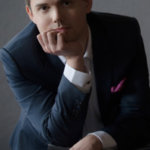