Professor Ben Sher is a veteran jazz guitarist performer/educator. He has five recordings on the BGI Records label. Tudo Ben and Me Leva Pro Brasil were the most popular and critically acclaimed and established Ben as one of the leaders of jazz guitarists focusing on Brazilian Jazz in the early 2000 years. After these were released Ben began touring, performing at clubs in Moscow, Switzerland, Germany, Austria, Japan, and in New York at well-known jazz clubs the Blue Note and the 55 Bar. Ben also created a program of studies in Brazilian Jazz at Berklee College of Music, which included two sections of Brazilian Guitar styles and a Brazilian Guitar Ensemble. Ben also has developed a course in the guitar styles of Pat Martino and Grant Green. As sideman Ben has performed and recorded for numerous artists in numerous styles. He appears to open two recordings on Knitting Factory Records with Matt Dariau’s ‘downtown jazz’ group Ball in the Jack. He toured Europe extensively with Broadway cabaret star Ute Lemper and has recorded tracks for a wide variety of artists including Todd Levin a protege of Phillip Glass, and Oswaldo Montenegro a Brazilian pop star. Ben is also the head of the Guitar Department at Kutztown University. 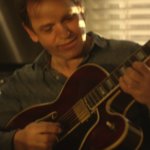