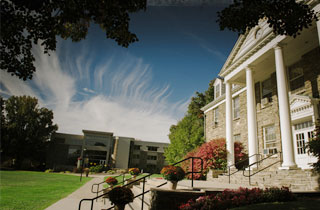 Located in Houghton (Allegany County), this private, Christian, liberal arts college began in 1883 as a seminary (high school) under the Wesleyan Methodist Connection. Coeducational from its founding, Houghton operated as a secondary school for its first 15 years. In 1899 a few college classes were offered; the college department’s first diploma was awarded in 1901. While early principals were Wesleyan Methodist pastors willing to accept the job, in 1908 Houghton acquired its first academically-trained president, James S. Luckey, who served until his death in 1937.

Houghton College received its provisional charter from New York State in 1923 and awarded its first 19 baccalaureate degrees two years later. A permanent charter was granted in 1927, and accreditation by the Middle States Association of Schools and Colleges came in 1935.

SignIn / SignUp Using Or
Don't have an account? Signup now