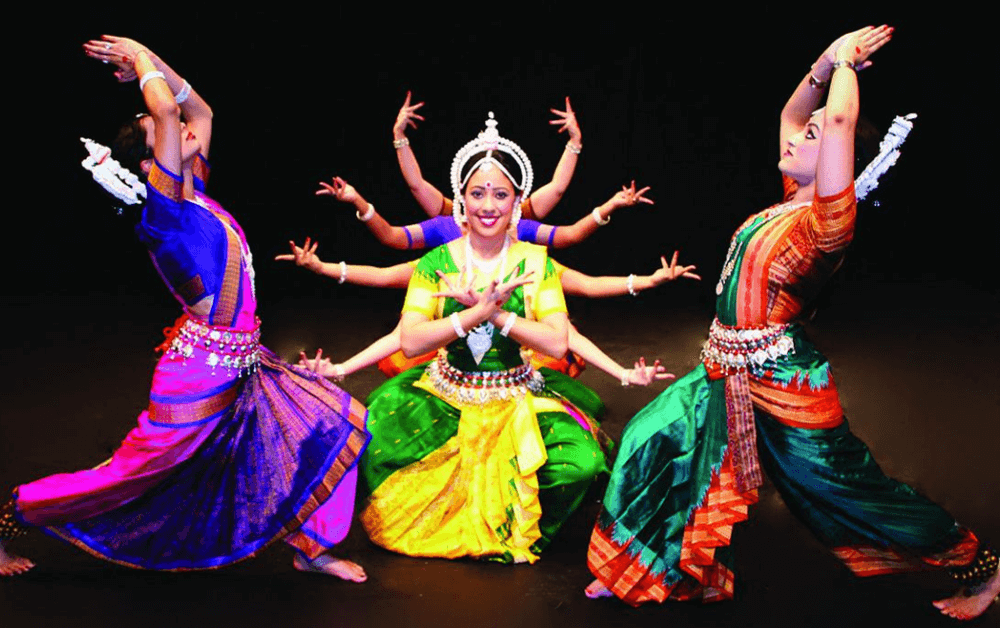 Odissi, one of the various genres of Indian classical dance, was born in Odisha, a state on India’s eastern seaboard. Odissi is a sensual and lyrical dance of love and passion that touches the heavenly ardour and the human side with the sublime gestures and the movements. The Natya Shastra cites various regional variations, including the Odhra Magadha, a south-eastern form that may have been traced back to the oldest precursors of modern-day Odissi. Odisha Hindu temples and different ancient sites affiliated with Hinduism, Jainism, and Buddhism, whose sculptures embellish dancing postures of this art form, bear witness to the ancient history of Odissi.

The caves of Udayagiri and Khandagiri in Bhubaneswar have archaeological evidence of this dance form dating back to the 2nd century B.C. From the 2nd century B.C.E. to the 10th century C.E., numerous instances of Buddhist sculptures, tantric depictions of dancing Yoginis, the Nataraja, and other heavenly musicians and dancers of early Shaivite temples bore testament to a continued legacy of dance. These influences coalesced into a singular ideology known as Jagannath’s dharma or religion. By the 7th century, A.D Hinduism had taken root in Odisha, and numerous majestic temples had been built. In the 13th century, the magnificent Sun Temple at Konarak was built with its Natya mandap or Hall of Dance which represents the pinnacle of Odisha’s temple-building activities. Even today, Odissi dancers are inspired by these frozen-in-time dance gestures. Maharis has been the primary repository of this dance for ages. The maharis, initially temple dancers, became hired in royal courts, causing the art form to degenerate. Around this time, a group of young men known as gotipuas were taught the skill and performed it in temples and for popular amusement. The gotipua tradition is home to many of today’s gotipua gurus. Under the patronage of King Ramachandradeva, Odissi is thought to have grown further in the 17th century. Hindu dance writings such as the ‘Abhinaya Darpana’ and ‘Abhinaya Chandrika’ with detailed hand and foot motions, varied standing positions, and dance repertory are included.

Muslim troops attacked Odisha’s temples and monasteries, and other institutions in the eastern Indian subcontinent after the 12th century, plundering these historical places and significantly affecting the development of all art forms and artists’ independence. The Sultan Firuz Shah Tughlaq (1360-1361 CE) invasion of Odisha resulted in the devastation of various temples, including the Jagannath Temple in Puri, which included damage and destruction of the dance halls and dancing sculptures. During this time, art forms decreased, and what remained, notably as royal entertainments, was owing to the patronage of a few affluent monarchs. Temple dancers entertained the Sultans’ families and courts throughout the Mughal and Sultanate periods, and some of them became royal concubines.

This is India’s foremost classical dance form, along with Bharata Natyam, Kuchipudi, Kathak, Kathakali, and Manipuri. Its accurate reproduction of stances found on classical temple statues shows vast antiquity. In its core structure, Odissi emphasizes twisted postures and is animated by various altitudes and leaps, similar to Bharata Natyam. It is primarily a female-oriented dance. Odissi enjoyed a resurgence of sorts after surviving the turbulent years from the 16th century A.D. till Independence, which helped it become the global phenomenon it is today. To preserve Odisha’s particular character, famed Odia poet Kabichandra Kalicharan Pattanayak, who was at the center of the state’s cultural resurgence after independence, preceded the classical music and dance genre with “Odissi.” Watching Odissi Dance to “Poetry in Motion” is fitting because of the heartfelt expressions accompanied by beautiful gestures and graceful movements accented with occasional intervals of quiet. The emotional spectrum is vast, touching on everything from sorrow to ecstasy, sensuous to fury, pride to devotion, and intellectual to religion.
Vaishnavism and other Hindu gods and goddesses such as Shiva, Surya, and Shakti are represented in this dance genre.

Invocation, nritta, nritya, Natya, and moksha are examples of instructive anecdotes of legendary and religious stories, devotional poetry, and spiritual notions emoted by dancers with great body movements and emotions, remarkable gestures, and sign languages. The prayer, Mangalacharana, is followed by the gift of flowers, Pushpanjali, and the homage to Mother Earth, Bhumi Pranam. The Batu or Batuka Bhairava, Battu Nrutya, or Sthayee Nrutya, pure dance or nritta dedicated to Lord Shiva, is the next in order. It is exclusively performed to rhythmic music and does not include any reciting or singing. The following section is nritya, which provides for expressional dance or Abhinaya, which uses hand gestures or mudras, emotions or bhavas, and eye and body movements to tell a tale, song, or poem. The second section, Natya, features a dance play based on Hindu mythology and epics. Female dancers use vividly colored saris, generally made of local silk and embellished with traditional and regional motifs, such as the Bomkai and Sambalpuri saris.

The front section of the sari is pleated or has a separate pleated material embroidered in front to allow the dancer to move the legs freely while displaying outstanding footwork. On top of that, most of the jewelry is silver, as opposed to gold, which adds to the allure of the dance style. Her head, ear, neck, arms, and wrists are all adorned with silver jewelry. Her ankles are wrapped with musical anklets called ghunghru, formed of leather straps with little metallic bells attached, and her waist is bound with an intricate belt. Alta red dyes have been used to brighten her feet and hands. She has a tika on her forehead and draws a bold line around her eyes with Kajal to make her eye movements more pronounced. Her hair is styled in a bun, and Seenthi is applied to it. The hairstyle may be adorned with a moon-shaped crest of white flowers or a Mukoot, a red crown with peacock feathers symbolizing Lord Krishna. A male dancer wears a dhoti that is neatly pleated in the front and tucked between the legs, covering his lower body from waist to ankles while leaving his upper body bare. His waist is adorned with a belt.

This dance form is unusual in that it contains Indian ragas from both the south and north, indicating a cross-cultural flow of ideas and performing arts. The primary ragas of Odissi include ‘Shokabaradi,’ ‘Karnata,’ ‘Bhairavee,’ ‘Dhanashri,’ ‘Panchama,’ ‘Shree Gowda,’ ‘Nata,’ ‘Baradi,’ and ‘Kalyana.’ Among the musical instruments Tabla, pakhawaj, harmonium, cymbals, violin, flute, sitar, and Swarmandal are a part of it. This specific dance form is now well recognized, and it was included in the Guinness Book of World Records in 2012 following a performance by 560 Indian Odissi dancers to set a new record. They put on a fantastic dancing performance in Bhubaneswar, Orissa’s Kalinga Stadium. The audience was thrilled by the performance, which gave voice to Indian dance culture across the world, which is a source of pride for all Indians. Kelucharan Mohapatra is the most well-known and prolific Odissi dancer. In Odisha and other regions of India, he taught a significant number of people.

Odissi has numerous roots and, as a result, covers multiple views while attempting to comprehend them. Odissi’s creators remained in communication with history and the modern world while also being molded by their times as they established it as a globally recognized Indian classical dance style. As a result, current practitioners may use the history of Odissi to think about their practice as something that is constantly evolving and to be reflective about the nature of that change. The holy soul and the human spirit are linked by a glorious mixture of motions, gestures, and expressions which Odissi represents.